Start a Wiki
Nene (ネネ Nene) is a Guardian Angel that only appears once in the ending of season 2 of Angel Tales. She was a Dolphin in her past life.

In the ending, it describes being continued. However, there has never been a season 3 to be released. It is more likely possibility that season 3 was going to be created, but Wonderfarm never has made it for unknown reasons. A major possibility is that Nene and the new angels could have been new characters going to be in season 3, but it is unknown.

They say she is the youngest out of the other two new angels.

She is good at reading the heart of the person because of this, people often judge her and dislike her. 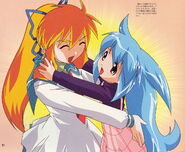 Add a photo to this gallery
Retrieved from "https://angeltales.fandom.com/wiki/Nene?oldid=6093"
Community content is available under CC-BY-SA unless otherwise noted.